A resurrection of the age-old talent contest jazzed up with reality-TV drama, Britain’s Got Talent was launched on UK TV in 2007. Ten seasons later, it is still going strong, having spawned local versions in countries all over the world. Britain’s Got Talent Superstar, designed specifically for mobile devices, is the second slot title from Playtech software based on the hit TV show; their first was simply titled Britain’s Got Talent.

Instead of the new-screen bonus rounds featuring animated acts of the first game, Britain’s Got Talent Superstar rewards players with an Exploding Reels feature. Every time a winning payline appears, all the winning symbols in it explode, and new symbols drop in to take their place. These can result in more wins, more exploding symbols, and yet another shot at making winning combinations. So the player, in effect, gets at least one free spin for every win, with the potential to continue repeating the free spin on an extended winning streak.

Better Symbols than the First Game

Britain’s Got Talent Superstar real money online casino game has a better range of symbols than the previous game, using only A, K and Q from the Poker symbols and icons based on acts in the show for the rest. The five semi-transparent reels display three symbols each against the backdrop of an enormous Union Jack flag, with the 20 pay line numbers housed in brightly hued stars. Union Jacks are also visible in the colourful starbursts behind the characters in the icons.

Players can choose the number of Britain’s Got Talent Superstar pay lines they want to bet on, and wager from 1 to 500 coins per line. Wins start with three Qs on a pay line, in unbroken succession starting on Reel 1: the prize is 20X the line bet, referred to as 20 coins for convenience. Four or five Qs win 25 or 30 coins respectively. For Ks, the wins for three, four or five of a kind are 25, 30 or 40 coins, and for As, 30, 40 or 50 coins. 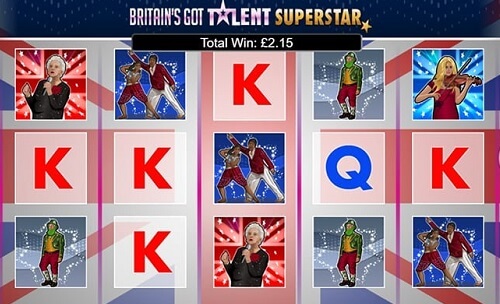 No Wilds or Scatters

Britain’s Got Talent Superstar’s biggest advantage is the exploding reels feature. An effective free spin after every win, with the possibility of more to come, really adds up to become rewarding in long-term play.